Lonestar was founded in 1992 and quickly became one of country music’s most celebrated groups. Lonestar has charted more than 20 singles on the Hot Country Songs chart, including 9 that reached No. 1: “No News,” “Come Cryin’ to Me,” “Amazed,” “Smile,” “What About Now,” “Tell Her,” “I’m Already There,” “My Front Porch Looking In” and “Mr. Mom.” “Amazed” also charted at No. 1. The group has recorded seven albums, a greatest hits package, and one album each for three different independent labels. Three of their albums have been certified platinum or higher by the Recording Industry Association of America.

Lonestar has amassed RIAA-certified sales of over ten million albums since their national launch in 1995 and achieved 10 No. 1 country hits. The band’s awards include 1996 ACM Top New Vocal Group, 1999 ACM Single of The Year for “Amazed” (the song also won “Song of the Year “), 2001 CMA “Vocal Group of the Year, and 2002 ACM Top Vocal Group. With an average of 80 dates worldwide per year, they are celebrating over 25 years together. 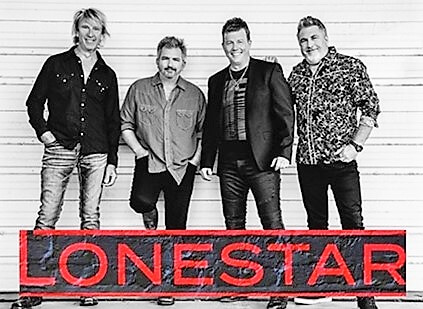